Customers are reason why businesses exist. Businesses create value for which customers pay them – directly or in some other way – leading to creation of surpluses for the producers. That’s how it has been and will be in the future of businesses. If the customer is at the center and around everything that an enterprise does, an interesting question pops up about industry regulators. Who should regulators count as customers?

On one side of the regulators are the businesses that are regulated. It is the responsibility of the regulator to ensure there are level playing fields, non-discriminating policies, compititative environment and a healthy set of guidelines that ensure long term viability of the industry. The word “viability” is nuanced. It can be interpreted to mean assurance of a steady stream of supernormal profits, which it clearly does not – or should not – construe. Viability should rather mean ensuring a fair exchange for a service provided. And the fair exchange should be determined by the market. Regulators have to step in when market forces either break down or are ignored via collusion or such practices amongst suppliers. This is where the regulator starts serving the other end of his relationship structure – that with the consumers. Consumers in a retail heavy industry do not have the luxury of collective bargaining (or lobbying) like the suppliers have. This places an onus on the regulator to devote a disproportional share of attention and protect interests of consumers in the industry. It is indeed a fine balancing act that some regulators – especially those in India – find difficult to juggle

Regulators in India are notorious for being personality oriented. There is always enormous pressure by the firms in an industry to get an “insider” as the head of the regulating body. An “insider” is most likely to frame policies that are supplier friendly and at times conveniently look the other way when malafide happens. Industries that have enjoyed directed policies are most vociferous about getting insiders to top positions in regulators. Financial services in India is a nice example. For the past several years the industry has languished. Accusing fingers for the state of affairs have been pointed at every direction except the most important one. Inwards. The industry has made no efforts at innovation, business model disruption and such mechansim to break the logjam yet has had resources focused trying to fleece customers through bad product design, collusion and reckless sales practices . Just search the internet on misselling of financial products in India and you will be submerged with what comes back. HSBC had to suspend selling its mutual funds and insurance products when it possibly could not digest anymore the rampant malpractices. The Insurance regulatory authority in India, IRDA, is looking for a new boss and guess what the industry is clamoring for? An insider

Businesses must realize that pulling wool over consumers’ eyes is as transient a business policy as a drop of water is on a parched sand dune. The raison d’etre of a business is to create customer value. Steve Denning in a Forbes article argues, on the backdrop of Michael Porter’s firm Monitor Group declaring bankruptcy, that there is only one force (an oblique shot at Porter’s five forces) that matters – that of the customer. In situations where suppliers have abandoned pursuing that force with religious zeal, the regulator has to step up and play a much larger role for betterment of the industry. And in doing that it just cannot fall prey to the asymmetrical force of collective bargaining that skews the table in favor of the suppliers. In fact it must use its weight to overbalance in favor of consumers – and if required shake up the supplier mix such that it benefits the industry. Industries gather lard and gunk running for long patches of time with antiquated business models and policies that have unnecessary protective moats. Innovation is just a committee name for these businesses. Forward looking regulators need to self disrupt these industries to make them more efficient. For that they must make a choice. Who do they count as customers? 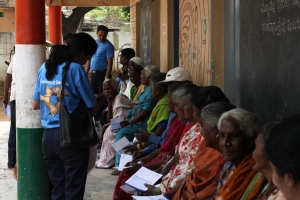 There was filth and squalor all around. The school, a government run single storied structure, was right behind a garbage dump. Dogs were running astray, feral beasts growling at the skillful kites that swooped down in calculated moves to usurp a common gourmet target from the dump. Street urchins loitered around in the midday sun. We mingled in that milieu as inconspicuously as a group of nuns would at a nightclub. Mineral water bottles in hand, all wearing a blue turtle-necked shirt, one carrying what obviously was a camera bag, we descended from a large bus and headed over to the school to do our social do. The annual Corporate Social Responsibility – a/k/a CSR – gig

It is not important to go into the details of our experience, which incidentally was quite overwhelming for us, curiously amusing to folks of the locality and rather useless for the NGO that we were affiliated to. The larger question is how best should something like social work be approached by corporations that want to give back to the society. The current model, most widely followed by companies in India that I know, has two variations. The first is where the company picks up a theme and aligns all it’s CSR activities around it. Anyone who has flown Jet Airways in India is aware of their Save the Children themed social activity. The second approach is more open where the firm chooses to work with a handful of NGOs of repute and lend resources for causes the NGO works for. Each model has its pros and cons and it is not my intent to initiate a debate on those. One feature of either model – or you may wish to call it a bug – is that the CSR activities happen parallel to, and most often in addition to, what the firm does as it’s business. This begs the question if there is a better model of social work where the company can creatively embed the cause into its business model

All businesses work to generate supernormal profits. There is nothing wrong in that. In pursuing that mission the business is interacting with and impacting the society in almost every activity it does. These are activities that happen as part of conducting business. Take my employers Thomson Reuters as example. We are the world’s largest provider of information and online workflow solutions for professionals. On the financial side, we power every financial institution on this planet in some way or the other. Thomson Reuters has a large business in India, a country plagued by financial illiteracy as well as a rather disturbing lack of penetration of financial products & services beyond Tier 1 and 2 towns. For a society to participate in and benefit from financial well being of a nation it is important to ensure optimal participation in banking systems and capital markets of every citizen of the country. A firm like ours can, and perhaps should, embed that social motive into our business model. Doing this frees up capital that was otherwise getting improperly spread too thin – now all the ducks can be aligned in one single straight line. A line that is no different from what the core business of the company is. This approach also allows the best use of human capital. None of us, for instance, we’re trained in what we ended up doing at that school (it was an opthalmological camp for people over sixty). Had this been about something that all of us are trained on, the engagement levels would have been much higher and consequently the impact of our work. This model works naturally for companies that have deep supply chains that reach sectors of society that when developed serves a shared cause for both the company and that part of society (a lot of FMCG companies come to mind, especially the e-choupal initiative by ITC). I’m not sure how this would work for say a very diversified software services firm or for that matter a company I referred to earlier – Jet Airways 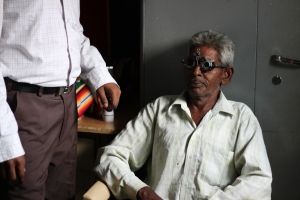 I claim to be no expert in the best approach for corporations to approach social service but I do believe nothing can be more powerful than an initiative that stands at the intersection of need, scale and expertise. I would like to think that the approach to CSR also shouldn’t be any different

Pictures in this post courtesy my colleague Ajay Singh